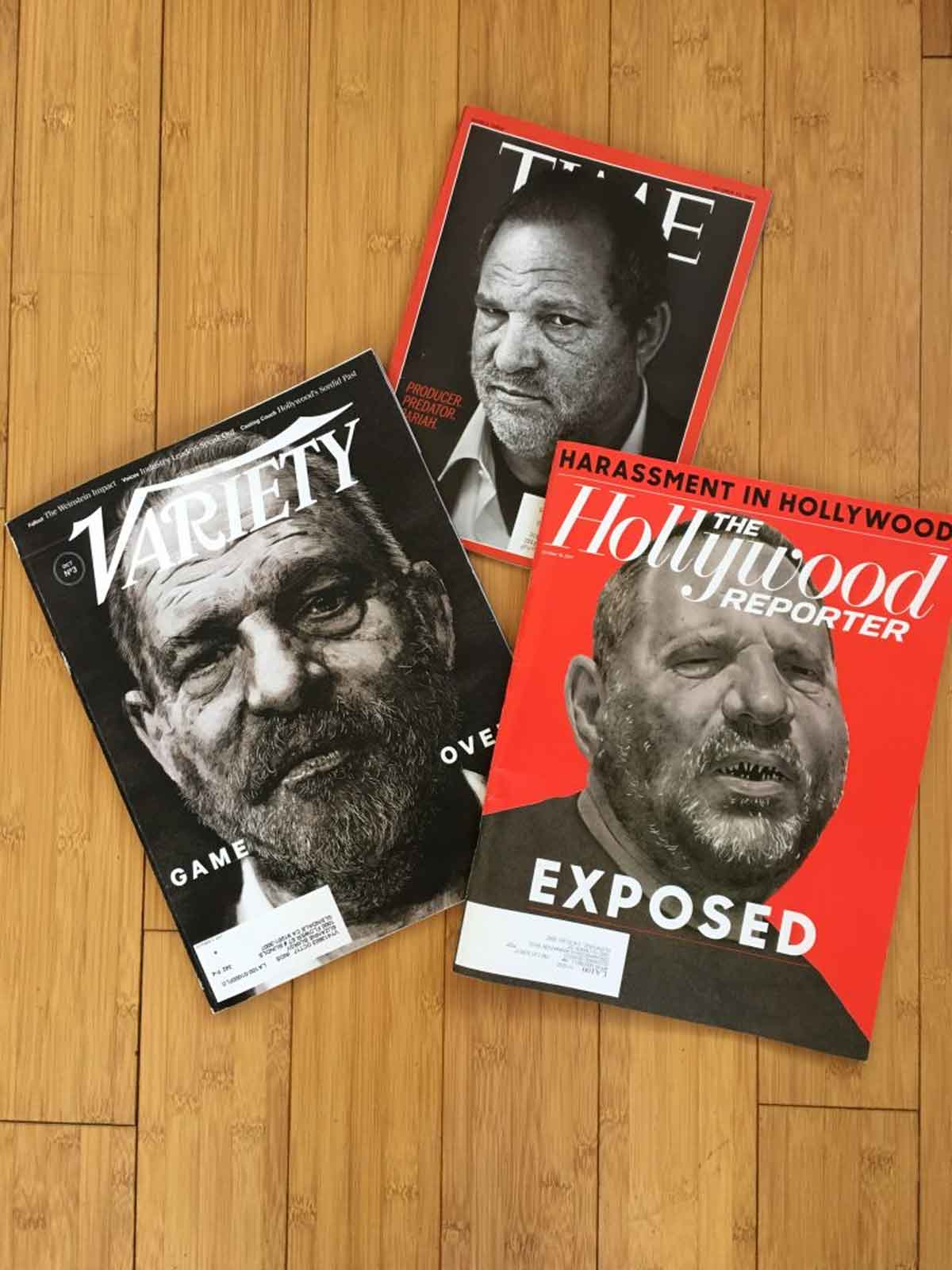 Harvey Weinstein is the earthquake under the volcano. Bullying women (or anyone) into giving favors—sexual or otherwise—has been going on since the Greeks and Romans—maybe even the cavemen. In this decade alone, alleged sexual predators facing law suits include Bill Cosby, Roger Ailes, Woody Allen, Bill O’Reilly, Casey Affleck, and the president of the United States.

Though it goes on everywhere, politics and the entertainment business in particular are so jacked-up with this conduct, it’s considered part of the landscape, part of the power, perks and payoffs. What, then, triggered this sudden resistance and potential reset?  If we stay with the metaphor, volcanos erupt when nearby earthquakes destabilize the the area; and earthquakes happen when the pressure building below the earth’s surface can no longer be contained. In other words, the victims said, “Enough!”

Like the proverbial candle in the dark, passed around to light thousands of other candles, when a handful of irate women hit their tipping point and tipped—the spark ignited. I believe at least half the energy blasting up the Weinstein Volcano was amassed over the last 10 months while women waited, stunned and seething, as absolutely nothing happened to Donald Trump after his “Grab them by the pussy/No one respects women more than I do,” psychotic break.

It was time. One thing or another was going to shatter the spell America’s been under since the election, and Harvey pulled the shit card! The mass awakening of the previously silent majority (“me too”), is the long-overdue opening we’ve been hoping for. It’s hard to be an abuser without a victim. And its hard to be a victim when you’re being heard! Speaking out can wipe out both the victim and the abuser in one powerful voice: the abuser loses control, and the victim gains it.

I too have traded my dignity for the wrong perks and carried that regret around for years— just read chapter three of my book (Random Events Tend To Cluster). It took me a very long time to tell myself, let alone others. But, despite the present and heartening roar of the betrayed, I see a very seductive trap we could easily fall into: That ol’ black and white, good and evil, simplification of “the problem.” This month, most of our successful news and entertainment media (you know, the “fake news”), have featured Harvey Weinstein in deliberately distorted photographs. This, of course, is a form of editorializing, clearly executed to make him look like a monster, not a human being. (And believe me, I have no sympathy for this man. That  is not my point. Neither is obstructing Freedom of the Press. Whether subtle or blatant, facts and opinions are all we have to help us navigate our world today. But we, alone, must sort out what is true by dragging it all through our own “shit-detectors.”)

I believe it’s far too easy to take a criminal like Weinstein and portray him as a monster, the “other,” something not human. What do we gain by doing that? Maybe that makes us feel better? Safer? “We could never be him. He’s a monster. Not human like us.”

Unfortunately he is human. Just like the Nazis were/are human beings. Trying to put them in a subhuman category will never allow us to understand them or their actions; thus guaranteeing a rerun. If we never know what drove an entire nation—in the middle of the “sophisticated” 20th century—to try to solve their economic problems by destroying millions of their fellow Europeans, especially the ones they saw as different from themselves—what’s to stop a sequel? Certainly not the terrified deniers. All those “good Germans” who stood around and said nothing were as bad as the Nazis; the entire holocaust could not have happened without them. And yet, they too were just other people. Not treacherous creatures we’ll never meet again. Without enlightenment about the past and present, these easily repeatable catastrophes await us tomorrow. The signs are everywhere.

When we hide any tragedy (sexual harassment, genocide, hate crimes, mass shootings) behind “they were monsters, villains, crazy terrorists, the axis of evil”—then they’ll be back. They’ll be back because we don’t know what happened in the first place. If we label a powerful mogul a “Monster,”  that person can hurt us. But if we let ourselves see someone—anyone—as human, everything changes. Information is available. Education is possible—not just for criminals, but for victims. And knowledge is power.  All the “monster” power we assign these people, can dissolve. Without fear, there is clarity: “Ohh, he’s just a jerk?? I thought he had something I needed, so I gave up my control; I handed him my power.”

Monsters are for Halloween. Damaged people are year round. I’ve always heard the first step to solving a problem is correctly identifying it. Deep breaths.